skip to main | skip to sidebar

Avoid the rush and win a coveted spot on BJP Blog #1 for 2011! We anticipate having at least two or three BJP blogs this year. It really doesn’t matter which one you’re on but it does matter that you register in time. While the process is just beginning, it’s easy to lose track of time while you decide if you want to join. Registration will end on December 8, 2010. If you haven’t sent your request in by then you’re out of luck for 2011!

Maybe you’re putting it off because you aren’t caught up for this year? That’s ok, finishing 2010 isn’t a requirement to join 2011. Check out this link for registration details and don’t delay!
Posted by robin michelle at 9:30 PM

Read this post by Robin Atkins, BJP founder, for guidelines and tips about getting started and keeping on track during the year! 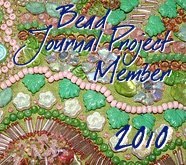 You can copy and paste this Member Logo to your own blog.

Important BJP Links ~ You Are on Blog #1

About the Bead Journal Project

The brain child of Robin Atkins, the first Bead Journal Project, which began in June of 2007, included 241 women and 1 man who were dedicated and committed to creating 12 bead journal pages, one per month, for a year.
The BJP is all about visual journaling using any media and techniques, providing it includes some beading. We are free to structure our bead journal pages any way we want, as long as all 12 are the same size.
The current years' Bead Journal Project runs from January 2010 through December 2010. This blog is a means by which we may support each other in process, techniques and design. Participants (many with links to their personal blogs or websites) are listed below.

A step by step tutorial on how to set up your own blog can be found here.